"Am I therefore become your enemy,because I TELL YOU THE TRUTH...?"
(Galatians 4:16)

The Third Temple and the Third World War...

Israeli Muslims know the Third Temple IS COMING,and insist WAR IS COMING WITH IT...

Calls for the REBUILDING OF THIRD TEMPLE...

"Your every move is being WATCHED...."

FALL of the REPUBLIC

...for TERROR and DISASTER INFO

Over the States with Executive Order...

Shadow of Things to Come:

"...For this purpose the Son of God was manifested, that he might DESTROY the works of the devil."
(1 John 3:8)

Bill would Give Obama:

Ginsberg: “Frankly I had thought that at the time Roe was decided, there was concern about population growth and particularly growth in populations that we don’t want to have too many of.”

ABC turns programming over to Obama:

..."News to be anchored from INSIDE WHITE HOUSE..."

Michael Savage Banned from the UK...

"Do not silence pastors nor penalize people of faith"

A year in jail at infamous Iran's Evin Prison...

...Arms outstretched, he wears crown of thorns on his brow

The Day After the Rapture...

..."The New World Order is Emerging"

Lose your property for growing food?

Big Brother legislation could mean prosecution, fines up to $1 million 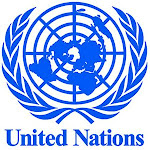 NWO WATCH:Swiss to Vote on...

"Time for a New World Order"

Sarkozy,Merkel and Blair call for a NEW WORLD ORDER...

Talk Radio with a Freedom Twist

Are you Ready for Unexpected

..."a new reformation or an end-time deception"

"a light shining in the darkness"

...are uniting Christians with the world's religions

As in the days of Noah 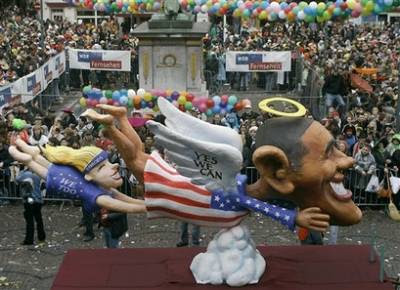 A carnival float depicting a flying U.S. President Obama with Europe being dragged along is seen during the traditional carnival parade in Duesseldorf, Germany, on Monday, Feb. 23, 2009. Rose-Monday-Parades in the carnival strongholds of Duesseldorf, Mainz and Cologne are watched by hundreds of thousands of revelers and mark the highlights of Germany's carnival season.